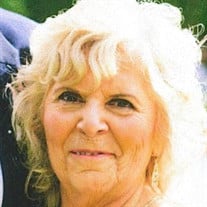 A Life Celebration of Patricia A. Grogan Patricia Ann Grogan, 79, of Baltimore, Maryland went to be with the Lord on July 10, 2021 surrounded by family. She was born February 18, 1942, the daughter of the late Josephine and Samuel Lusco. She was the youngest of 4 sisters, Catherine Popp, Mary Ricktor, and Francis Staub, all of which have predeceased her. She graduated in 1959 from St. Ann’s Business School. Patricia began as an Administrative Assistant from 1959 to 1963 before marrying and building her family. She moved to English Counsul in June of 1963 then gave birth to her beloved daughter Kimberly Funk in July 1963. Four years later, she gave birth to her beloved son, Robert Johnson Jr in May 1967. Patricia spent her years from 1970s to 1985 working in the Baltimore Country School system as a Cafeteria Manager. Patricia resigned from this position to become a fulltime “Mom Mom” to her first-born grandchild, Courtney Stratton. She then expanded her “Mom Mom” role with the birth of her second grandchild Adam Cox in 1988, and then again with Alexis Johnson in 1995. Over the years our beloved Mom Mom opened her arms and heart to her bonus grandchildren, Amy Hommerbocker, Jessica Cecil, Brandon Funk, and Matthew Funk. Patricia was married to the late Lawrence Grogan for 26 years, where they enjoyed traveling all over within the states. She dearly loved visiting new places and experiencing new things. In 2003, putting a bit of travel on hold, she became a Great Mom Mom with the birth of her first great grandchild, Roy Hooe 5th. She then spent her days caring for him and enjoying every second of it. As a Great Mom Mom, her quiver expanded with the birth of Gavin Johnson, Aiden Cox and, Kinsley Stratton. She was a bonus Great Mom Mom to Jessica Haas, Braden Smith, Caleb, Nathan, Cheyanne, and, Katie Cecil. During her life, Patricia never met a stranger. She was the kindest, most gentle hearted, thoughtful, strong, loving woman. She was very active in St. Clements Church and at Kenwood Gardens condominiums. She was survived by her daughter and son in-law, Kimberly and Kevin Funk; son and daughter in-law Robert and Donna Johnson; grandchildren Courtney and Brad Stratton, Adam and Kristy Cox, Alexis Johnson, Amy Hommerbocker, Jessica and Billy Cecil, Brandon Funk and Matthew Funk; great grandchildren Roy Hooe 5th, Gavin Johnson, Aiden Cox, Kinsley Stratton, Jessica Haas, Braden Smith, Caleb, Nathan, Cheyanne, and Katie Cecil. She completed her earthy duties on July 10th and entered into Heaven to hear “Well done my good and faithful servant.” A viewing will be held Monday July 19th, 2021 from 2-4pm and 6-8pm. The following day July 20th, 2021 will be a mass at St. Clements at 10:30am and internment at 1:30pm at the Veterans Cemetery in Crownsville, MD. Please omit flowers

A Life Celebration of Patricia A. Grogan Patricia Ann Grogan, 79, of Baltimore, Maryland went to be with the Lord on July 10, 2021 surrounded by family. She was born February 18, 1942, the daughter of the late Josephine and Samuel Lusco.... View Obituary & Service Information

The family of Patricia A. Grogan created this Life Tributes page to make it easy to share your memories.

A Life Celebration of Patricia A. Grogan

Send flowers to the Grogan family.