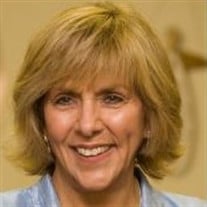 Colein LaRue Fischbach, beloved wife of Charles Fischbach died of natural causes at the Charlestown Retirement Community in Catonsville, MD on November 2, 2017. Colein was born on October 7, 1941 and grew up in Morrell Park, a suburb of Baltimore. She attended the local primary school and Southern Junior/Senior High schools. She married her teenage sweetheart, Charles on her 20th birthday, October 7, 1961. After her marriage, she moved to Linthicum, MD where she gave birth to four children; Karen, Kenneth, Kimberly and Keith. She was very active in her church, St Philip Neri, serving as Prefect of Lady�s Sodality, chairing many fundraising functions including the annual parish fashion show and participating in other church and school activities, with most of her time dedicated to her family. Desiring a Nursery School for her children, Colein initiated efforts resulting in the establishment of St. John�s Cooperative Nursery School in the old Linthicum Train Station in 1968. The Nursery School is still in existence today, 50 years later. She and her husband joined the Andover Swim and Racquet Club where the family enjoyed swimming and tennis. Colein�s tennis skills placed her on Andover�s tennis teams in the local tennis league. Colein was a member of the Woman�s Club of Linthicum and served in several leadership roles. She worked at St. Agnes Hospital in the Pediatrics unit for several years. After living in Linthicum for 36 years, Colein and Charles moved to San Diego with a job change. While there, they traveled extensively exploring the West Coast. After 3 years in San Diego, Colein and Charles moved back to the East Coast to be with family, settling in Ocean Pines, MD. They lived there for 13 years enjoying the beach with family and friends. Colein and Charles celebrated their 56th Wedding Anniversary on October 7, 2017. Colein�s lifelong love of helping others, making the world beautiful through her love of architecture, design, and entertaining and her dedication to family and community are carried forward by everyone who knew her. Her spirit will continue to brighten our lives just as her presence did for so many years. She is survived by her husband, Charles, four children; Karen, Kenneth, Kimberly, Keith, eight grandchildren; Zachary, Reed, Audrey, Sebastian, Grace, Nathan, Adam and Simon and her sister Elva Duff. Colein was preceded in death by her brother Raymond Brady and her sister Sandra Brady. Colein rests at the family operated HUBBARD FUNERAL HOME, INC., 4107 Wilkens Avenue, Baltimore, MD 21229 on Friday, November 10, 2017 from 3 to 5 & 7-9pm. Her family will receive friends again on Saturday, November 11, 2017 at Our Lady of the Angels Chapel at Charlestown, 711 Maiden Choice Lane, Catonsville, MD from 10am to 11am. Her Mass of Christian Burial will begin at 11am. Interment to follow in Loudon Park Cemetery. In lieu of flowers, donations may be made to Food for the Poor, Inc. 6401 Lyons Road, PO Box 979004, Coconut Creek, FL 33097 or Charlestown Benevolent Care Fund, 719 Maiden Choice Lane, Catonsville, MD 21228 in Colein�s name. $(document).ready(function(){ var ifr = $("#09u10156459x95d0"); ifr.data("ratio", ifr.attr("height")/ifr.attr("width") ); ifr.removeAttr("width").removeAttr("height"); // Resize the iframes when the window is resized $(window).resize(function(){ var width = ifr.parent().width(); ifr.width(width).height(width * ifr.data("ratio")); }).resize(); });

Colein LaRue Fischbach, beloved wife of Charles Fischbach died of natural causes at the Charlestown Retirement Community in Catonsville, MD on November 2, 2017. Colein was born on October 7, 1941 and grew up in Morrell Park, a suburb of Baltimore.... View Obituary & Service Information

The family of Colein L. Fischbach created this Life Tributes page to make it easy to share your memories.

Send flowers to the Fischbach family.