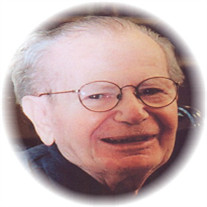 Geldman, Irving On Saturday, September 30th, 2006, Mr. Irving Geldman, beloved husband of the late Luz Sanabria Geldman; and brother to the late Nathan �Nat� Geldman, Max Geldman and Mary TePastte; passed away quietly in his sleep; he was the devoted father of Sandra Lynn Forquer, Linda Gail Morra-Imas, Robert Irving Geldman, and John Samuel Geldman; cherished grandfather of Beth Ann Ruch, Bonnie Louise Strickland, Gregory Geldman, Megan Geldman, Henry Geldman, Samuel Geldman, Karen Joyce Imas, Leon David Imas, Simon Michael Imas, and Ilanit Naomi Imas; and great-grandfather to Molly Elizabeth Strickland and Emma Strickland. He came at the age of 2 from a little town on the border of Russia to Ellis Island on the SS �Kroonland� with his mother and 3 siblings. He grew up in New York working in the garment industry. He was well educated, and received his BA from City College of New York. During the 1930�s, the United States Government hired him to travel to Puerto Rico to teach English as a second language to high school students. In Puerto Rico, he met and married his wife of 60 years, Luz Sanabria Geldman. They later returned to the United States and settled in New Haven, Connecticut where they had their children, and then moved to Trumbull, Connecticut where they lived for many years. In the retirement years, they moved to Cape May, New Jersey, where he was able to continue his enjoyment of fishing, birding and photography. He was also active in several civic organizations, including serving as President for the Cape May Kiwanis Club. He was also a member of the Cape May Businessmen�s Association and the Cape May Bird Observatory. In later years, he and his wife moved to the Charlestown Retirement Community in Catonsville, Maryland where he was well known for daily walking around the entire campus. He enjoyed his walks with his wife and they were both well known in that Community. His good humor, corny jokes and quips were always present. A Celebration of Life Memorial Service will be held on Friday, October 6th, 2006 at 11:00 AM in HUBBARD FUNERAL HOME, INC., 4107 Wilkens Avenue, Baltimore, Maryland, with Interment of Cremated Remains to follow in Meadowridge Memorial Park. In lieu of flowers, donations may be made in remembrance to The Association for Frontotemporal Dementias, 100 North 17th Street, Suite 600, Philadelphia, PA 19103.

The family of Irving Geldman created this Life Tributes page to make it easy to share your memories.

Send flowers to the Geldman family.