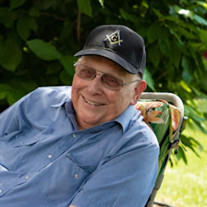 On December 13, 2021, Irvin J. Crowl Jr. passed away due to complications from COVID. He was 81 years old. Irvin had valiantly fought off cancer for over two years and was doing extremely well, but COVID took hold of him and would not let go. Irvin was the beloved husband of Sue Ann Crowl. She was his light and his soulmate. They met and were married in Baltimore, MD, and celebrated their 60th anniversary in February of this year. That day brought such happiness for the two of them, it is a memory that his family will cherish forever. Irvin was born in 1940 to Irvin J. Crowl Sr. and Lois A. Crowl. He is survived by his younger brother Edward R. Crowl; his sons Darrin J. Crowl Sr., and Michael R. Crowl and his wife Mary; loving grandfather of Darrin J. Crowl Jr., Brittany M. Crowl, and Jennifer L. Buerger and her husband Mike; dear great-grandfather of Scarlett Crowl, and Evelyn and Nicholas Buerger. Irvin worked 10 years at the Federal Reserve Bank and then 34 years at the National Security Agency. He was a Freemason and served as Master of Monumental Lodge in 1989 and 1991, and also as Master of Warren Lodge in 2020. Irvin was also a Shriner and served as Captain of the Boumi Temple Arab Patrol in 1985. He enjoyed coin collecting, metal detecting, history, and cruises. A Visitation will be held on Friday, December 17th, 2021, from 2-4, and 6-8 p.m. at HUBBARD FUNERAL HOME, Inc. 4107 Wilkens Ave. Baltimore, MD 21229. Funeral service will be held at the funeral home on Saturday, December 18th from 10:30-11:30 a.m. Interment will immediately follow at Loudon Park Cemetery at noon. The family would like to offer special thanks to the nurses and staff of York Hospital’s “5 South” ward for their amazingly comforting and attentive care, not only for Irvin, but also for his family. We also express our gratitude to Irvin’s oncologist, Dr. Dan Sotirescu, who provided the compassion, encouragement, and positivity that Irvin needed to endure many rounds of chemotherapy and succeed against cancer.

On December 13, 2021, Irvin J. Crowl Jr. passed away due to complications from COVID. He was 81 years old. Irvin had valiantly fought off cancer for over two years and was doing extremely well, but COVID took hold of him and would not let go.... View Obituary & Service Information

The family of Irvin John Crowl Jr. created this Life Tributes page to make it easy to share your memories.

Send flowers to the Crowl family.