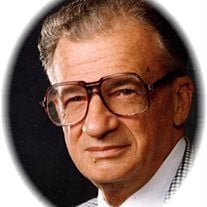 DeLaura, Frank A., M.D. Frank A. DeLaura, M.D., 91, a retired general practitioner, died May 6, 2007, of an aortic aneurysm at St. Agnes Hospital in Catonsville, MD. Family members were with him at his passing. Dr. Frank was born in Niagara... View Obituary & Service Information

The family of Dr. Frank Anthony DeLaura created this Life Tributes page to make it easy to share your memories.

Send flowers to the DeLaura family.